Some details from Monday. 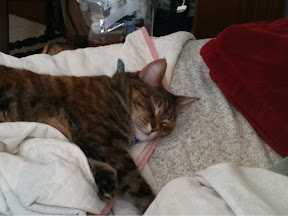 Two IVs -one more than expected- the first blew.

Two Needle Localizations – one more than expected. The first one was a bit short and wouldn’t catch in the tumor. So a second was required. Bigger wire, bigger needle. Yuk. And it seemed like a dozen extra mammograms yeehah!! And finally, the tumor was speared on a wire just like an olive on a toothpick. This allows the surgeon to easily locate the tumor during a breast sparing surgery such as my lumpectomy. Apologies to my martini drinking friends.

Two incisions – this was expected. One horizontal to remove the tumor, one vertical at the edge of my axilla to collect the sentinel nodes. They are covered with a lovely lavender glue instead of tape or such.

Two lymph nodes removed. We knew it was going to be between one and four sentinel nodes. These two were the ones indicated by the radioactive tracer. (that required 4 injections:-)

We are now expecting pathology on Friday.

Dr. Drogula expects to have gotten clean margins around the tumor and once we know that for sure and all about the pathology of both nodes and tumor I will begin to make choices further treatment.

And just for grins, numerology from Doreen Virtue:

222 — Have faith. Everything’s going to be all right. Don’t worry about anything, as this situation is resolving itself beautifully for everyone involved.